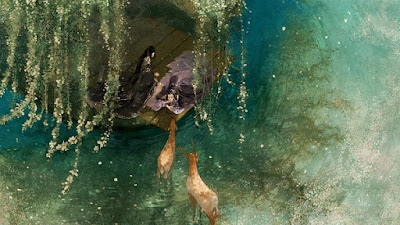 Just a few things to note to facilitate your reading:
-Yun Qian Meng has 2 cousins (older brother and younger sister pair) from her mother's side whom she is quite close to, they are genuinely nice people. The cousin she is referring to is the girl who is a few years older than her.
-Prior to this chapter, Chu Fei Yang had visited Yun Qian Meng's room in the middle of the night a few times without her consent.
-This scene takes place after a gathering at Chen Wang's place. Wu Qin Qin is someone who approached Yun Qian Meng with hidden agendas a few chapters prior to this.
-During the gathering, Chen Wang was alone with Yun Qian Meng is a fake hill/ mountain/cave kinda thing and tried to use force on her. Luckily Chu Fei Yang appeared in time.
-Later on during that gathering, Yun Qian Meng retailiated and trapped Wu Qin Qin.
- [1] The second character of one's name + the character "er" is used as a term of endearment. Used for women and children.
-The gathering happens some time after Yun Qian Meng was bestowed to Chu Fei Yang. (When he knelt down and asked the emperor to allow him to marry Yun Qian Meng in front of so many people kyaaaaa)
-[2] Wang Fu: Prince's mansion. For Chu Fei Yang, since he is the prime minister 相 Xiang, his mansion will be called Xiang Fu.

The moment Yun Qianmeng stepped on the stool and opened the carriage's curtain, she saw a figure sitting in the carriage. She immediately put down the curtain and instructed, " Mu Chun, we will accompany cousin ."

"You dare!" A soft voice carrying a hint of anger came from the carriage; it was so soft that only Yun Qianmeng could hear it.

Ignoring the voice, Yun Qianmeng stepped off the stool. This time round, the voice shamelessly threatened, "If you like me coming into your room in the middle of the night, then you can leave now."

Although she was feeling angry, Yun Qianmeng still retracted her steps. "I want to be alone, you can accompany cousin."

Mu Chun did not understand why but did not oppose Yun Qianmeng and walked towards the other horse carriage.

In the carriage, Yun Qianmeng only glanced at Chu Fei Yang and sat down to close her eyes for a rest.

Seeing that she was ignoring him so, the anger in Chu Fei Yang slowly dissipated and he inched his way beside her. Observing her side profile; her small and graceful face exuded self- confidence and the stubbornness which were rarely seen, her long and thick lashes cast a slight shadow on her high and delicate nose, she had ruddy and full lips. This caused Chu Fei Yang's heart to skip a beat and he could not help but slowly lower his head...

Even though Yun Qianmeng had both her eyes closed, she could still sense a certain someone inch beside her but she did not open her eyes until she felt that someone's body heat getting closer to her face. She could not help but knit her eyebrows together slightly and in the end, she could not restrain herself any longer and abruptly opened both her eyes.

She saw Chu Fei Yang staring at her, with his head bent. He did not stop because she opened her eyes, instead, he started smiling! A trace of annoyance flashed across her eyes and she glared at Chu Fei Yang.

"Awake? Not sleeping anymore?" Seeing that she finally opened her eyes, Chu Fei Yang opened his mouth - which was extremely close to her face - to ask. His tone was mischievous, yet his eyes twinkled with seriousness.

Awkwardly shifting her body, she gave a few coughs, stablising her heart which was thrown into a slight mess by Chu Fei Yang. "Why are you here?"

Looking at her being able to calm herself so fast, Chu Fei Yang was a little disappointed and straightened his body. With his eyes still on her, he coldly said, " Today you were too audacious!"

Hearing this, Yun Qianmeng turned to face Chu Fei Yang. At that moment, his face was particularly grave unlike his usual warm smile.

"Audacious? If I'm not audacious, today, the person being pointed at and talked about would be me! That Wu Qin Qin originally approached me with ulterior motives, if I did not retaliate, I would have long ago fallen for her trap!"

It was just that Yun Qianmeng herself did not realise that when she spoke, she was expressing her anger openly, showing how she truly felt. She did not cover up her innermost heart, but openly displayed in front of Chu Fei Yang. This caused most of the coldness in his face to thaw and his eyes to glimmer dotingly at her.

"Then what if you had failed?" Despite understanding where she was coming from, he still did not agree with her life-endangering behaviour, especially with men like Chen Wang who made advances at her. Just thinking about how Chen Wang tried to take advantage of her in the cave earlier on, Chu Fei Yang could feel a surge of anger rising.

Yun Qianmeng just shook her head," Nothing ventured, nothing gained."

"What about me? Aren't you afraid that I would be worried?" Yun Qianmeng's answer angered Chu Fei Yang and he immediately grabbed her shoulders, forcing her to face him.

Yun Qianmeng was startled, she never thought that she would hear such words coming from his mouth! With Chu Fei Yang staring at her with eyes full of emotions, her heart started thumping chaotically and two red clouds faintly appeared on her cheeks. Her always confident gaze became somewhat bewildered as she tried to escape his gaze. But this time, Chu Fei Yang was determined not to let her escape, he did not even give her half a chance to escape but stared at her intensely, letting her know his heart's deepest concerns.

Yun Qianmeng could see, in his eyes, anger, worry, affection, and what she had never come in contact with before... Love.

This time, her heart felt feelings of affection rising for Chu Fei Yang. After a while, she could only whisper, "I'm sorry."

Before her words landed, she felt someone pull her into his warm chest and found that her body was being hugged tightly by Chu Fei Yang. "With you fighting alone, how can I be assured? Meng Er [1], can't you believe in me?" She heard his voice, without a trace of his usual confidence, quietly whisper.

"With you fighting alone, how can I be assured? Meng Er, can't you believe me?"

Yun Qian Meng could hear his heart beating loudly but her ears, as if by magic, could not stop ringing with Chu Fei Yang's "Can't you believe in me?"

Thinking about the times they met, if it's said that she did not have the least bit of feelings for Chu Fei Yang, that would be a lie!

Having been through all sorts of scheming and traps, how can she trust others?

But now, her ears still ringing with Chu Fei Yang's words, Yun Qianmeng's heart felt a trace of pain. Was she too cold? So cold that it hurt his heart?

Perhaps she should try to assure him, if they were really going to spend a lifetime together, if she really wanted to spend eternity with this man, then she should get to know him rather than escaping!

As she quietly nestled in his embrace, she softly answered, "Yes."

Thinking that he heard wrongly, Chu Fei Yang immediately pulled away, with sparkling eyes that could not contain his joy and surprise, he opened his mouth for confirmation, " Really?"

Looking at Chu Fei Yang who was rarely this excited that he was actually glowing with joy, Yun Qianmeng smiled and confirmed, "Of course, when have I lied?"

Hearing this, Chu Fei Yang's face darkened and he muttered, " Can the lies you have told be counted as little?"

Just now at Chen Wang Fu [2], did she really think that he did not see it? This little fox had already dug up the trap and was waiting for the enemy to fall for it!

Listening to Chu Fei Yang made Yun Qianmeng a bit indignant and she retorted, " Didn't I do this for..."

However, before she could finish talking, her stubborn mouth was blocked by his thin lips......

Posted by sparklingdawnlights at 1:29 pm